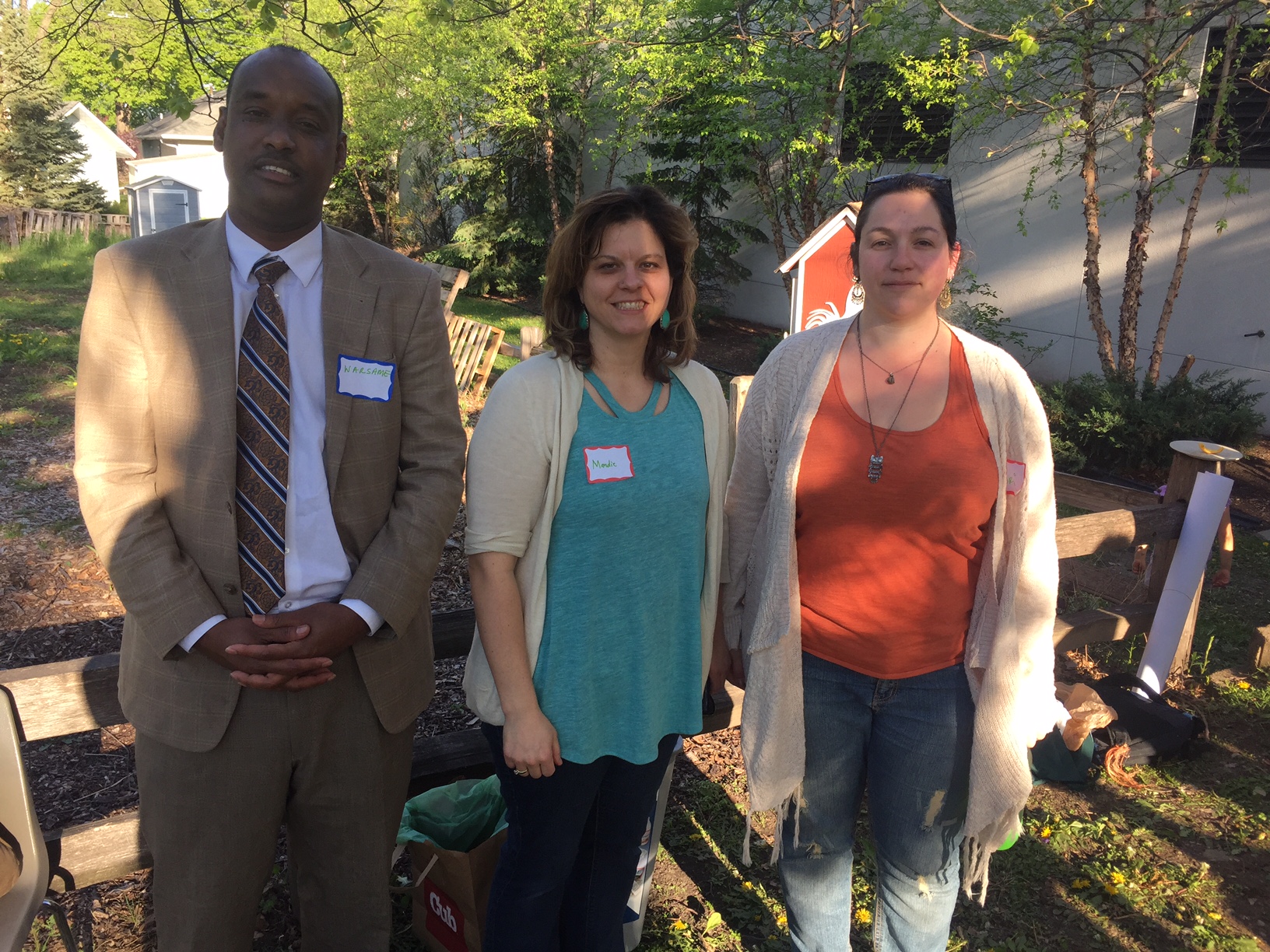 On the beautiful spring evening of May 10th, over 50 residents gathered at Corcoran Community Garden to enjoy live music by Parks and Wreck drummer Joe Forest and guitarist Oscar Cozza (with a special appearance by Oscar del Sebastien), to enjoy grilled burgers and share homemade dishes, to mingle with neighbors, and to elect members for the CNO Board.

The meeting was led by Board Chair Flannery Clark, who was elected to the board at last year’s meeting.  Flannery serves as Co-Chair of the Land Use & Housing Committee in addition to leading the CNO Board of Directors.

Lisa Barajas was re-elected to another term as board Vice-Chair.  Lisa has previously served as CNO Chair for two two-year terms, and earned the CNO’s Volunteer of the Year award in 2015.  She continues to be an instrumental leader in the development at 2225 East Lake and advocating for the Humanize Hi-Lake campaign.

April Riordan was re-elected to another term as board Treasurer.  April has served as Treasurer since 2015, ensuring the Board is using resources wisely and meeting its fiduciary responsibilities.   In addition to volunteering with CNO, April works at Big Brothers Big Sisters of the Greater Twin Cities. Look for April and her family (including a new puppy!) on walks around the neighborhood.

The CNO Board is excited to welcome three new board members!

Lori Kinzel-Auer was elected as an At Large board member.  Lori has lived in the Corcoran neighborhood for just over four years and works as a graphic designer, artist, and front end developer.  Corcoran News is fortunate to have Lori as the volunteer designer, as she spends countless hours each month on creating an engaging and professional publication.  Lori looks forward to getting to know more about our neighborhood and becoming more involved in CNO activities.

Siyad Warsame was elected to as an At Large board member.  Warsame leads the African Reconciliation and Development Organization as the Founder and Executive Director.  As a resident of the newly built Blue Line Flats, Warsame has quickly gotten to know his neighbors by bringing residents together to address security issues.  His main interests in joining the CNO Board are to encourage community dialogue among our diverse neighbors, promote small business development, and address public safety issues in the neighborhood.

Mandie Kender was elected as an At Large board member.  Mandie lives with her husband and two children and enjoys getting to know neighbors by hosting outdoor movie nights in the summer.  She also has been a block leader for three years and has been involved with CNO since she moved to the neighborhood five years ago.  Mandie joined the CNO board because she strongly believes that healthy, thriving neighborhoods can contribute to healing our city, state, country, and world.  She is proud to live in Corcoran and excited to be part of CNO’s effort to unite neighbors and foster a sense of belonging.