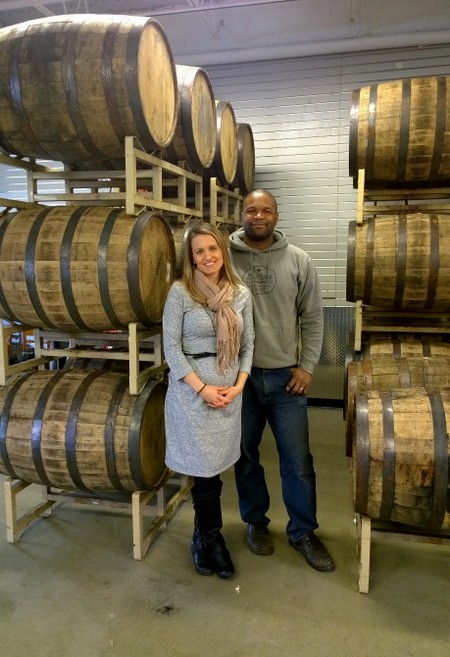 As they say in Real Estate, part of the appeal of the Corcoran Neighborhood is “Location! Location! Location!”. We have Lake Street, light rail, major shopping and local restaurants, but the one thing that is difficult to get around here is a cocktail. While Du Nord sits just across Hiawatha from Corcoran, it definitely fits the bill – good quality, locally made spirits within walking or biking distance in an elegant setting.

Chris Montana grew up around the neighborhood and went to South High and his wife, Shanelle, is from rural Minnesota. The two watched as the craft beer industry exploded and customers became educated about things like ABVs and IBUs and the quality of the beer they were drinking. Chris was a home brewer and since the science of distilling is similar up to the distillation process they had a hunch there just might be a market for craft spirits as well!

Lobbying succeeded in getting the licensing needed to start their business but they still needed to find space. Going back to his roots, Chris thought South Minneapolis would be the perfect place and the 32nd Street location had the proper zoning as well as proximity to light rail and local neighborhoods.

Although they have been distilling and selling their gin and vodka locally since last April, the big hurdle was the Cocktail Room licensing and build out. Tap rooms are all the rage, but Du Nord is the first cocktail room in the Twin Cities. Well known as the former location of Motoprimo, the space needed a remodel. It was covered in diamond plate and some was spared to create a light-reflective backsplash and bring interest to the outer wall. The tables and bar are made from reclaimed barn wood and good old elbow-grease that give the room a stylish, yet comfortable feel.

The cocktail menu was a collaboration with Mike Rasmussen, of La Belle Vie and Libertine fame, with the Moscow Mule being one of their biggest sellers. If you are more adventurous, I suggest the George Leigh Mallory as its slightly sweet mint and lemon flavor is refreshing and unique. The cocktails are made from grain obtained at the family farm and other high quality, locally sourced ingredients, when possible.

Du Nord has a lot to offer the neighborhood and even more to come. Spring will bring an expanded deck to seat 40 patrons and barrels have arrived for aging whiskey for future sale. Shanelle hinted at specialty weekend brunch cocktails as well as an increased emphasis on music and food trucks in the near future. I was assured they are working hard to get bottle sales added to their license so out of town visitors who tour the brewery or even neighbors can buy a sample to take home without a detour to the liquor store.

I was also promised two new secret menu items — will it be another type of spirit, or perhaps a uniquely Minnesotan flavored vodka? Your guess is as good as mine as she was very tight-lipped about adding any additional details. Keep your eyes on their website for events, menus and hours. Better yet, stop in and have a little toast to celebrate this new local establishment!

Kelly Savage is a resident of Corcoran neighborhood, and a volunteer reporter with Corcoran News to spotlight local businesses. If you know of a business in neighborhood that should be spotlighted, please contact <[email protected]>.