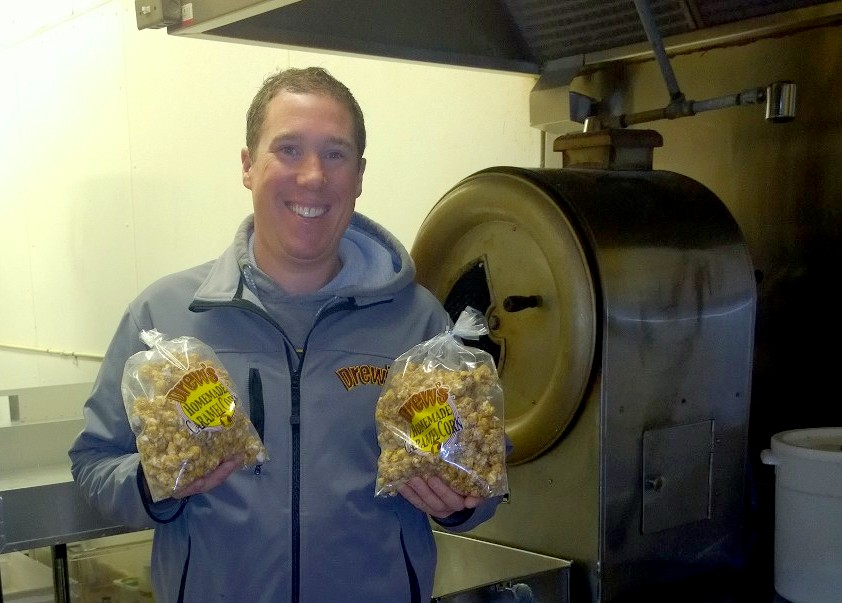 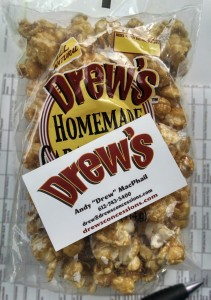 Fast forward about 7 years. Drew attended a Gopher hockey game and noticed the mini donut vendor of past years was vacant. He immediately went into motion to find out if he could fill the void. Unfortunately, the arena had determined they would not be bringing mini donuts back, but his tenacity did finally pay off. He persisted in contacting the arena in hopes to sell his donuts and, in frustration, agreed to make anything they needed. The answer was “fresh popcorn.” The following season he had his fresh popcorn business up and running, but he still needed to distinguish his product from other popcorn vendors.

rew then remembered family gatherings and his grandfather’s caramel corn recipe. The family had always loved it and fought over any leftovers and Drew had started making batches with his grandfather to perfect his technique back then. He made a small batch that passed the taste test and has been growing in popularity ever since. This brought Drew’s to Corcoran. Being close to both downtown and campus, and conveniently located near McPhail’s South Minneapolis home, the location provides what he describes as a “safe neighborhood” spot to run his business.

The Corcoran location, 3501 23rd Ave S, is specifically their Caramel Corn kitchen. You can find this corn in Mariucci and Williams arenas, TCF Bank Stadium, Xcel Energy Center and at the Ordway, State and Pantages theaters. Over 70 local grocery stores carry Drew’s Caramel Corn including Byerly’s, Kowalski’s and Lund’s. As a Corcoran neighbor, Drew has invited you to knock on the door if the lights are on or music is playing so they can sell you the freshest caramel corn available.

Kelly Savage is a resident of Corcoran Neighborhood, and is a volunteer reporter with Corcoran News spotlighting local businesses. If you know of a business in neighborhood that should be spotlighted, please contact [email protected].