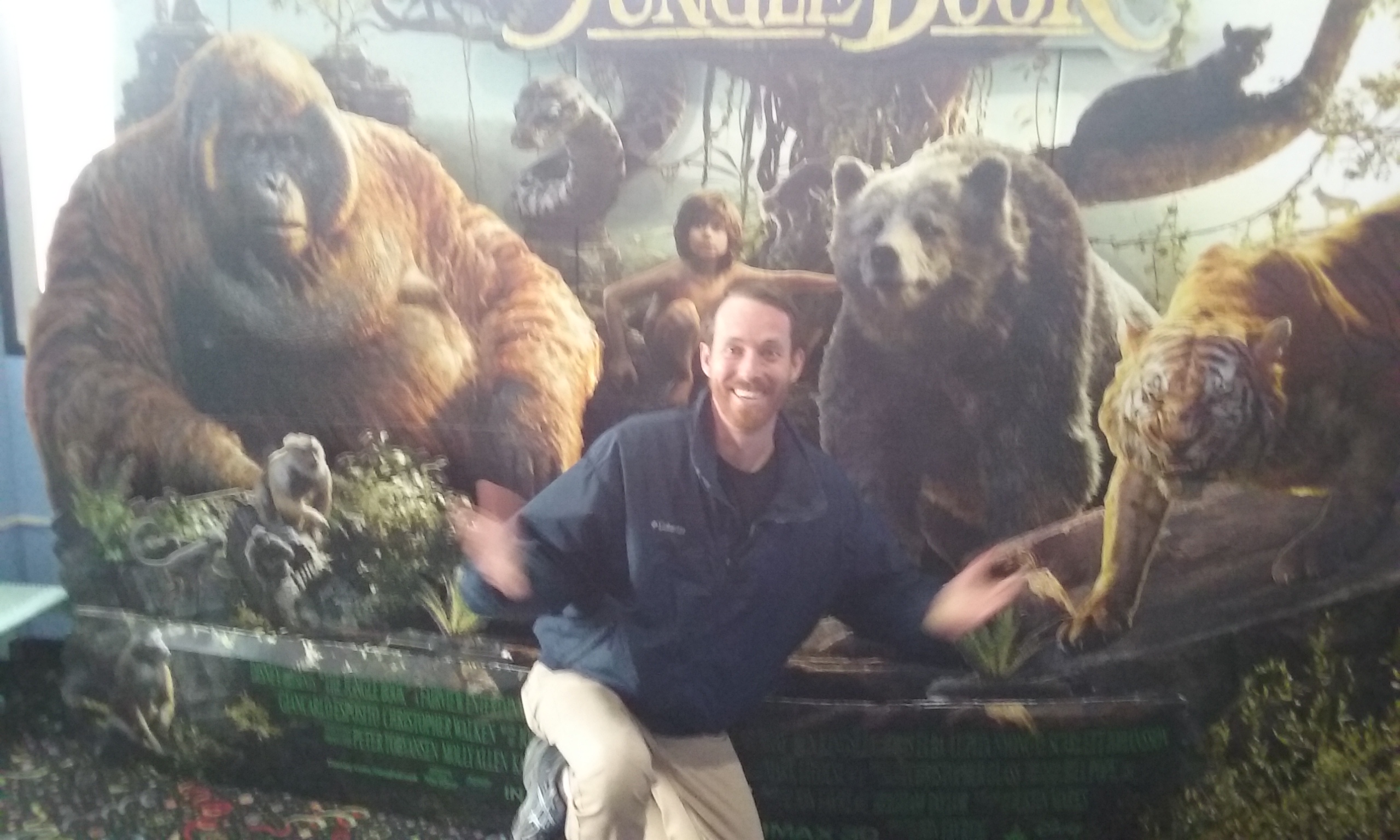 As I write this, Disney's The Jungle Book continues to hold off the newest competition at the box office with no signs of letting up.  Director Jon Favreau (Iron Man, Elf) has captured Rudyard Kipling's original intensity as he chronicles the adventures of an orphaned boy, Mowgli (a perfectly cast Neel Sethi), raised by a wolf pack deep in the jungles of Asia.  The plot thickens quickly as Mowgli becomes hunted by a murderous, law-breaking tiger, Shere Khan.

Toward the beginning of the movie, Khan's presence is intimidating, but not dominating, as he is sufficiently opposed by the wolves.  Mid-movie, when he attacks and kills their leader, the pack wisely cowers, along with the audience -- the tiger has grown twice his size in our imaginations!  What can stop this?  Courage.  Enter Baloo the bear, the hero of the film in many ways.  His interventions are raw, violent, and loud…the opposite of his innocuous disposition and comical Bill Murray voice.  In a rescue that takes place in a tree, a Psycho-esque screech (more on the composer's contributions later) pierces our ears as the giant grizzly's claws descend through flesh.  It is terrifying, yet a welcome terror as we the audience (along with Mowgli) are released from the hypnotic grasp of a serpentine monster.

As for Mowgli, he spends the first half of the movie trying to function as a wolf, and the second half (in part thanks to Baloo) utilizing the ingenuity of his humanness to protect his own life and the lives of his animal friends.  When he saves a baby elephant I cried because of seeing this formerly depressed man-cub realize his unique 'tricks' (initially a derogatory term given by the wolves to discourage him from being "too human").  And this, for me, was the heart of the film.  The Jungle Book, without sugarcoating our capacity for destruction, made me proud to be human.  Mowgli's mentor, the black panther Bagheera, tells him, "The elephants created everything in this jungle, but they did not create you."  Yes indeed, Bagheera!  Humans are different and it is right to celebrate that.  In the Bible, we read that God made humans in His image for a reason, "The Lord God took the man and put him in the Garden of Eden to work it and take care of it" (Genesis 2:15). Caring for the environment is a distinct task assigned to us, and Mowgli's resourcefulness on behalf of the jungle embraces such an understanding.

For my initial viewing I paid $12 for IMAX 3D at the Minnesota Zoo and it was worth every penny.  A big grin came over my face in the opening moments of the film as I realized I had just purchased a ticket to a Disneyland ride…I even bumped into two Corcoran residents in the lobby of all things!  On my way out I imagined how fun it would be to walk the park observing the bona fide animals from the film.  This movie will awaken the naturalist within, and you may even find yourself scanning the next MCE for Tree Climbing 101.

I must admit I have been a snobbish hold-out to most CGI as "I don't care to watch a video game, thank you very much!"  But I was so immersed in the world Favreau brought to life that I truly forgot it was CGI, and you will too!

For the second viewing, I handed over $14 to check out the hyped D-Box simulation seats at M.o.A.  The experience was gratifying (minus a sore neck: the result of leaving my motion level on HIGH), but I confess I struggled with the comparatively 'tiny' 2D screen after my first experience.  Maybe someday IMAX and D-Box will stop fighting and realize their common destiny in our galaxy?

Award winning composer John Debney (Iron Man 2, The Passion of the Christ) has crafted a majestic score (reminiscent of John Barry's Out of Africa) complete with 'The Bare Necessities' (the Baloo song from the 1967 animated classic) -- molding that loveable tune into a rousing post-climactic finish that will leave you cheering!  And remember the scene with the baby elephant?  Debney takes the silliness of the song, slows it down, and somehow finesses it into a tear jerker.  And finally, be listening for his powerful use of percussion throughout, but particularly in two areas: #1 The Stampede  #2 The Red Flower (particularly as Mowgli is running back through the forest at night)…wow!

I did not care for the voice matching of King Louie (the monkey king), or Kaa (the giant python).  The actors (Christopher Walken and Scarlet Johansen respectively) did fine, but when linked with their characters, neither totally suspended my disbelief.  I also did not appreciate Kaa's 'Trust in Me' song playing in the credits.  Why glorify a villain as if this were a James Bond film?  And especially for children…they need to know that the villain is dead.  Let it rest.  Why awaken fear?

Parental Advisory: While this movie is free of cursing, sexuality, and gore, DO NOT mistake it as necessarily appropriate for younger viewers.  It is extremely intense, from start to finish.  Shere Khan's cruelty (both actions AND words), is particularly unsettling.  Re-watching the 1967 version proved therapeutically important to settle my own frazzled emotions.  It is cartoony -- light, fun, and leaves you in charge of all of your senses.  Favreau's version plays you for a rag doll, at times dark, foreboding, uncomfortable, and completely deserving of every Oscar it will win.

Did you see The Jungle Book?  Where and how?  What did I miss?  I'd love to hear your verdict.  [email protected]

P.S.  Driving past Lake Nokomis from the theater I noticed a mama duck and her eight -- very new -- ducklings headed for the marsh, but needing to cross a busy side street to get there.  I was going to keep driving were it not for the nagging thought, "What would Mowgli do?"  I hit the brakes, turned on my hazards, and ran over to act as traffic cop.  As they waddled to safety I walked back a little taller past the other vehicles, enjoying the satisfaction that I had used my 'tricks' for good.