Corcoran has a wealth of public art created by individual artists and community groups. CNO uses public art as a vehicle to unite neighbors and turn ordinary spaces into public places. 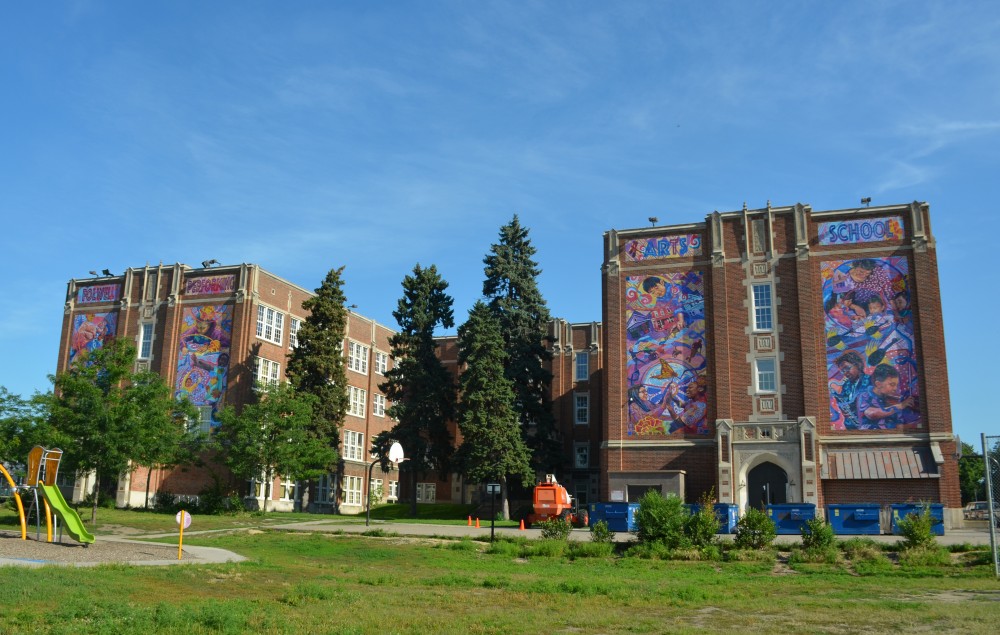 The mural is called the Connections Mural, inspired by the Connections Gallery at Roosevelt High, and created in partnership with CNO, SENA, and Folwell. Lead artist Greta McLain describes the project, "We want to make visible the connections between the school communities, the school, and the surrounding community. We also wanted to showcase the fabulous arts programming that makes Folwell a super unique school in the MPS system."

Images speak to how we are all strands in a great braid/community weaving, with those strands also representing waterways that connect us back to the land and Minnesota. There are images that flow through the different panels linking them together. There are images that speak to migrations and transformation (butterflies and flying geese both based on kid drawings), marigolds that are culturally significant in Mexican culture and also grow everywhere here in the summer. There are also multiple references to ” home”, kids wearing their “home” on their heads and playing in their neighborhood (houses). 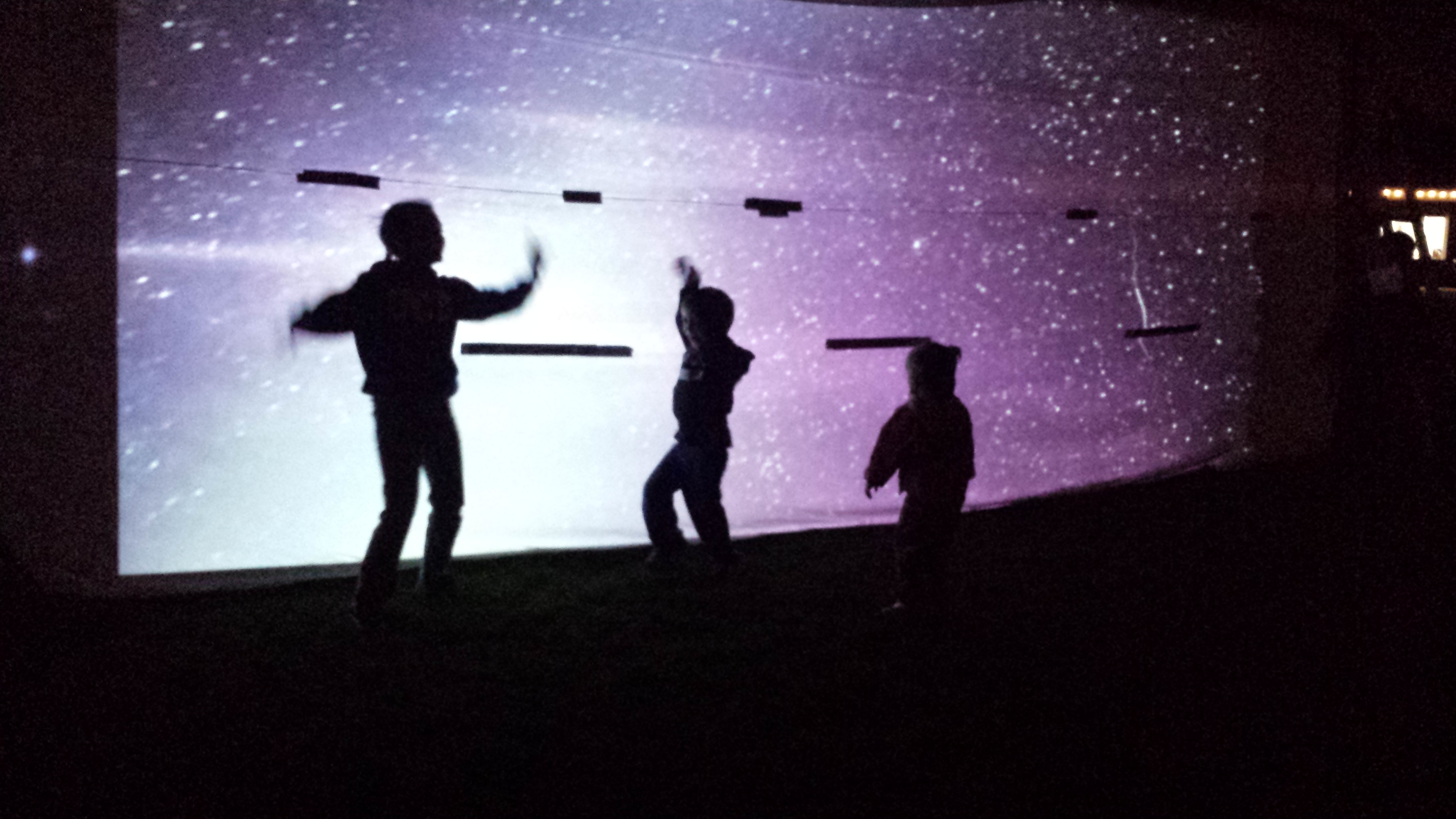 "Take the Field" is an art series that engages neighborhoods with their public sports spaces in new, inspiring ways. On October 11th, 2013 community members came out to transform South High Athletic Field into a living, breathing timeline illustrating our place in the cosmos. Giant projections and audio broadcasts provided the backdrop for more than 500 students and an assortment of artistic geniuses from the Twin Cities. Together we created a work of art that was visible from outer space (assuming you are looking down with incredible digital zoom). See the video of the night here. 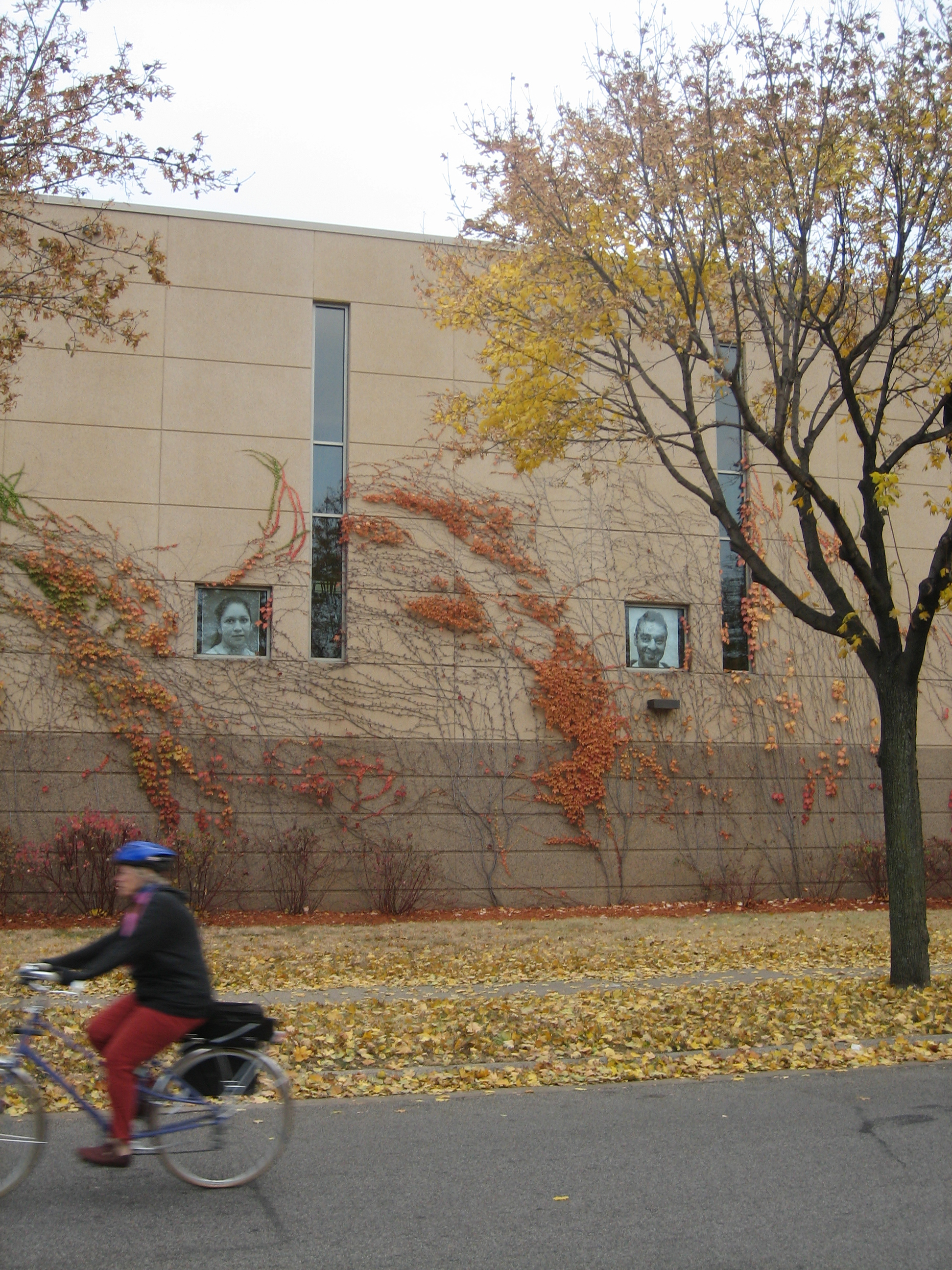 Corcoran photographer Sarah Claire Ahlers will capture portraits of a diverse cross-section of 20 neighborhood residents, and then print and install the portraits in large-scale format at various locations in the public realm in order to create a visual dialogue, strengthening the relationships of neighbors, helping to foster a stronger sense of community and connecting the neighborhood to a worldwide public art movement — The Inside Out Project. Installation occurred during the Spring 2012. Sarah Claire responded to a 2011 CNO Call for Art and was selected by a jury of Corcoran residents.

Corcoran Filmmaker Phillip O’Toole and CNO are proud to present “Paint the Pavement — the intersection of art and community.” Phillip and his camera were “embedded” with the block club, project artist, and volunteers who designed and painted a pavement mural at the intersection of East 34th Street and 19th Avenue South in the Corcoran neighborhood of Minneapolis in August 2011. Phillip’s movie explores the community process of creating the project, and the impact the experience had on participants and the neighborhood. 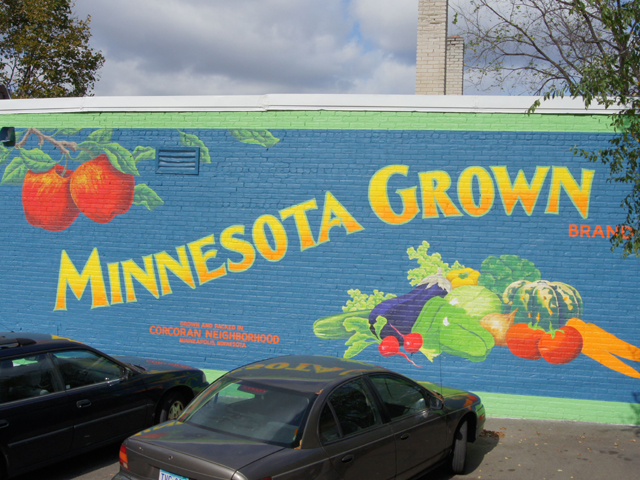 Corcoran muralist Carole Bersin was commissioned by CNO to paint a mural on the south-facing facade of the retail building at 3501 23rd Ave S in Sept-Oct 2011 with graffiti prevention grant dollars secured by CNO from the City of Minneapolis, and in cooperation with the property owner. 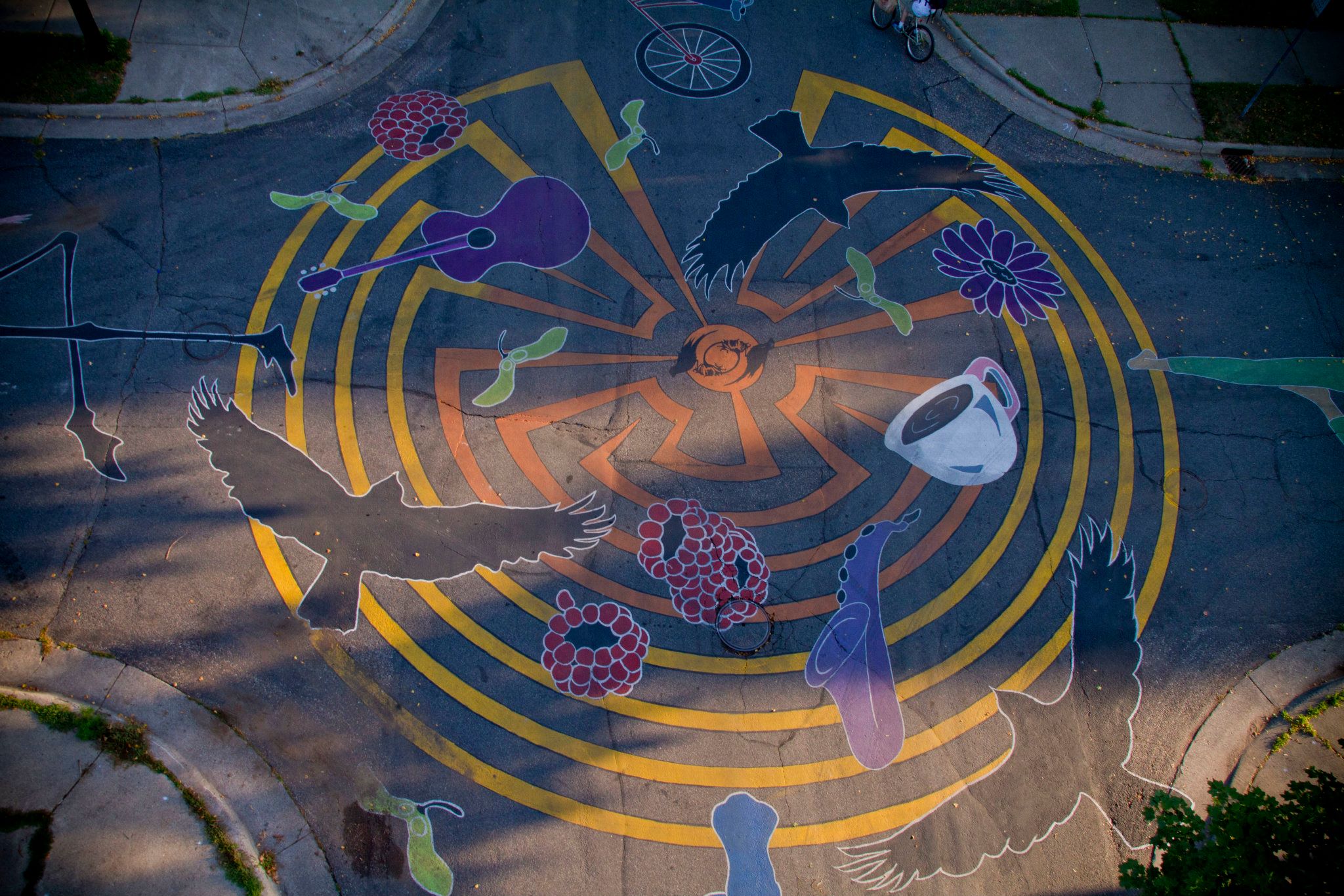 Over 90 volunteers, led by artist Carole Bersin and CNO staff, installed a pavement mural at the intersection of E. 33rd Street and 21st Ave S in June 2012.

The mural featured a “maze of life” labyrinthine pattern overlaid with neighborhood people, creatures, and objects. Carole’s design was informed by input from neighbors who live on the block, in response to the question, “what is in your maze of life?” Carole responded to a 2012 Call for Pavement Art and was selected by a jury of Corcoran residents. The design was approved by the Minneapolis Arts Commission and Minneapolis Public Works, and installed using anti-skid traffic marking paint.

The mural was designed by Cedarleaf Dahl based on ideas submitted by nearly 200 students, and expresses the theme “Connecting School to Community.” The project was organized by CNO with help from Standish Ericsson Neighborhood Association. Elissa responded to a 2012 Call for Pavement Art and was selected by a jury of Corcoran residents. The design was approved by the Minneapolis Arts Commission and Minneapolis Public Works, and installed using anti-skid traffic marking paint. 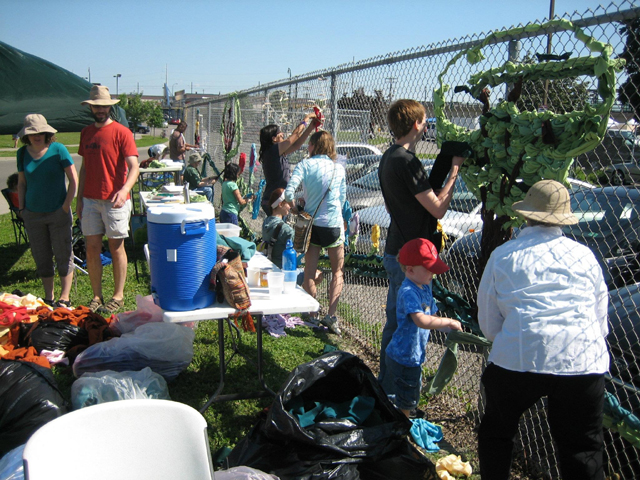 Over 70 volunteers helped artist Denise Tennen transform a chain link fence at the Midtown Farmers Market during a June 2, 2012 project of CNO. Denise responded to a CNO Call for Art and was selected by a jury of Corcoran residents.

With volunteers recruited from two free painting workshops held in August, Corcoran artist Sree Nair will transform three utility boxes with a painted butterfly bouquet reflecting the rich cultural tapestry of our neighborhood, as well the indigenous species of this region. Installation is planned to be complete in October 2011. Sree calls his proejct “De Colores, Y Las Flores.” Sree responded to a 2011 CNO Call for Art and was selected by a jury of Corcoran residents. Sree’s previous work on utility boxes can be found in downtown Minneapolis on Hennepin Avenue. 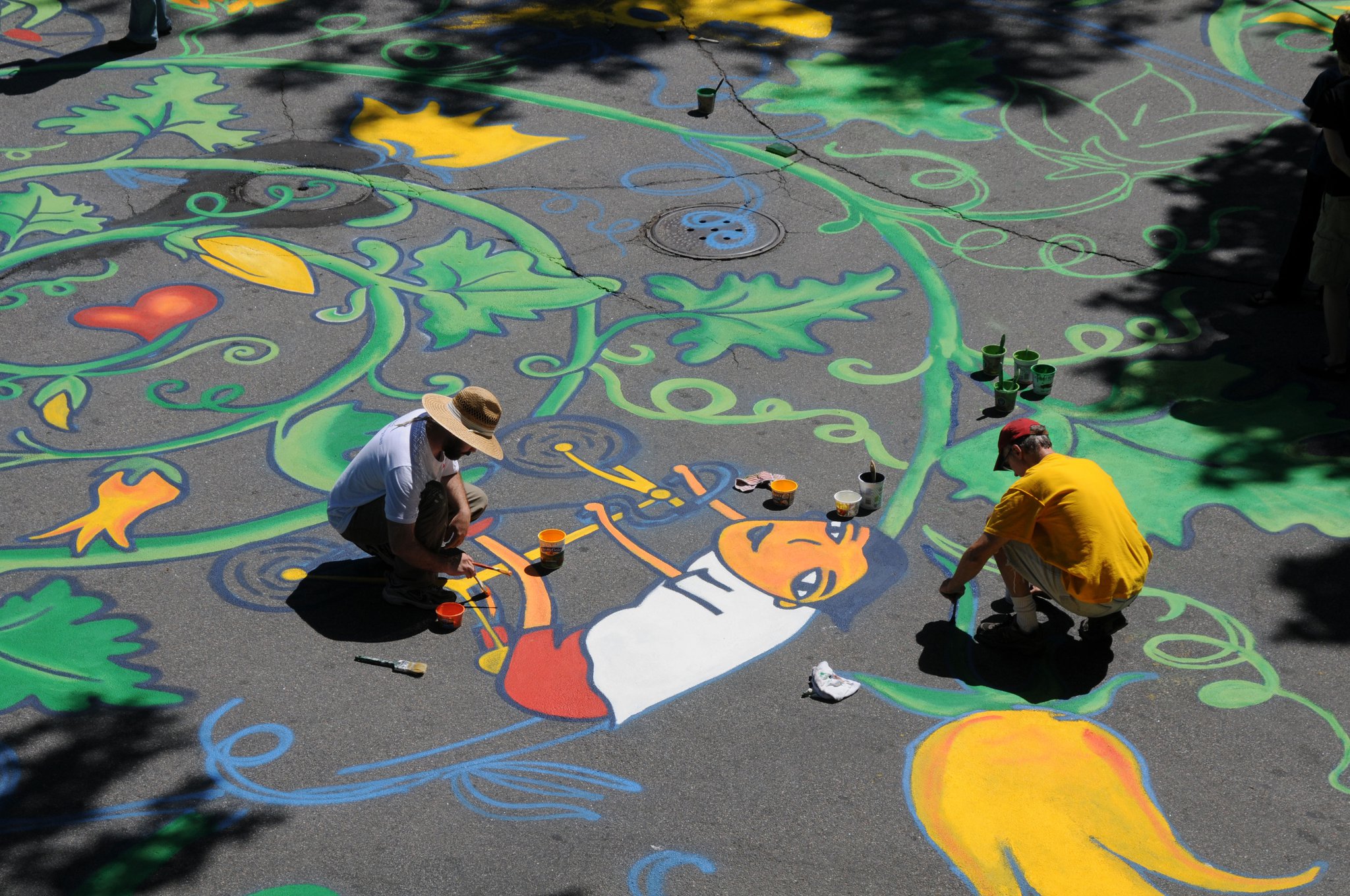 Over 100 volunteers, led by artist Elise Kyllo and CNO staff, painted the first pavement mural in Minneapolis at the intersection of East 34th Street and 19th Avenue South in August 2011.

The design was coauthored by residents through a series of visioning and design meetings with the artist. The project concept came from the 34xx 19th Avenue block club, whose concerns and discussions around traffic calming last year informed CNO’s project concept. Elise responded to a 2011 Call for Pavement Art and was selected by a jury of Corcoran residents. The design was approved by the Minneapolis Arts Commission and Minneapolis Public Works, and installed using anti-skid traffic marking paint.

In May 2012, the mural was repainted by volunteers led by artist Melanie Casiday.

Longfellow muralist Megan Moore was commissioned by CNO to paint her Tree of Life and Flower Garden murals on the commercial garage and office building at 3501 20th Ave S in July 2011.

Just across the street, Powderhorn muralist Elise Kyllo was commissioned by CNO to paint her Sheep mural on the residential wall at 2010 E. 35th St. The projects were made possibly by graffiti prevention grant dollars secured by CNO from the City of Minneapolis, and in cooperation with the property owners.