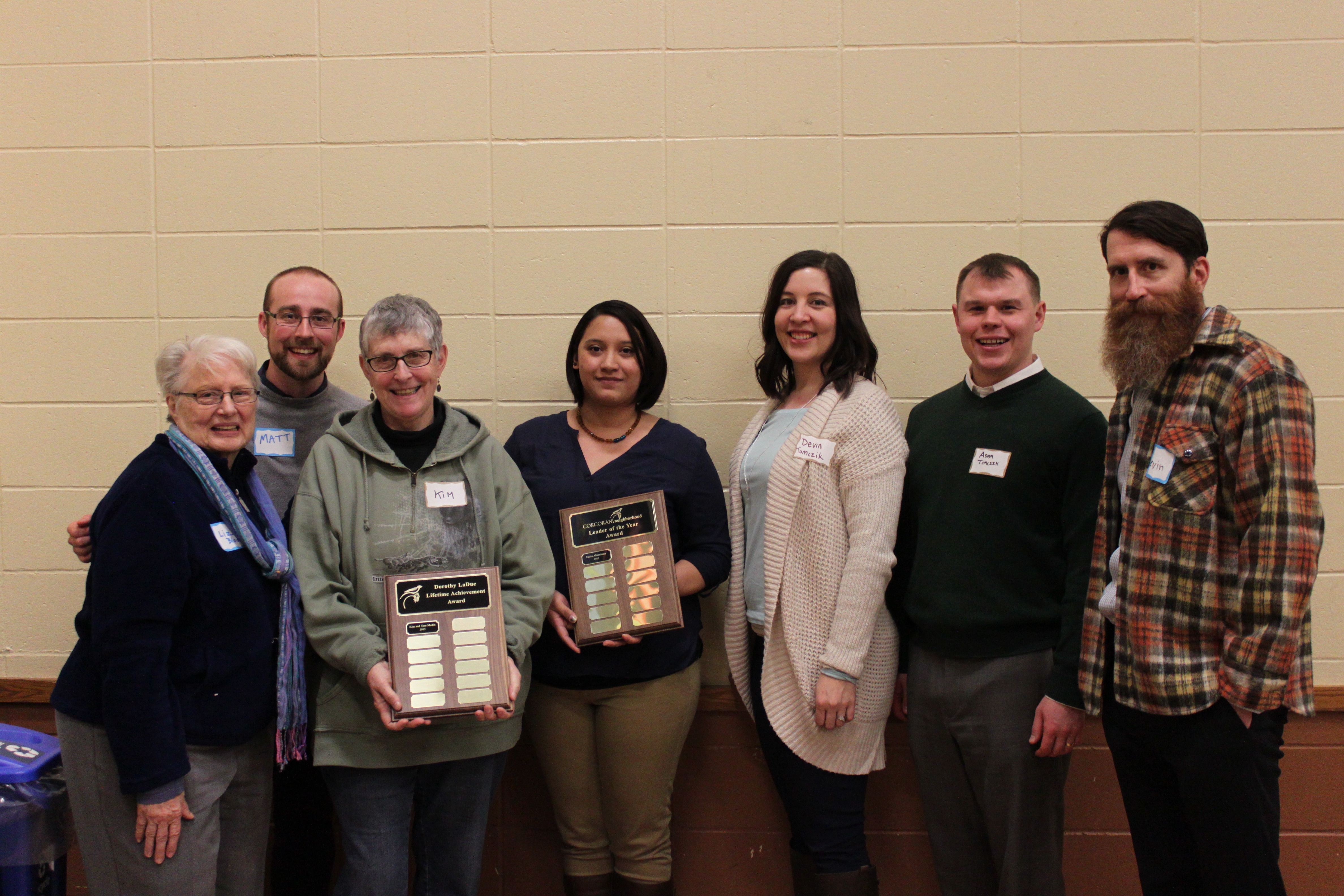 In 2015, Leaders in Corcoran continued to work hard to ensure our neighborhood is vibrant. Thank you to residents who give time, energy, and finances to support the mission of uniting our neighbors to strengthen our neighborhood. Residents gathered together on Wednesday, February 24th at the Annual Community Awards Dinner, which built community and celebrated our amazing leaders.

The evening kicked off with a delicious fajita bar catered by volunteer chef Greg Miller, resident and owner of Kabomelette, a mobile food kitchen. Food was generously donated by La Alborada, Lunds, and Taco Taxi. Scrumptious desserts were prepared and donated by May Day Café and Drew’s Concessions. Music was provided by Parks and Wreck, a youth band that receives instruction from Eric Silva Brenneman at Corcoran Park. 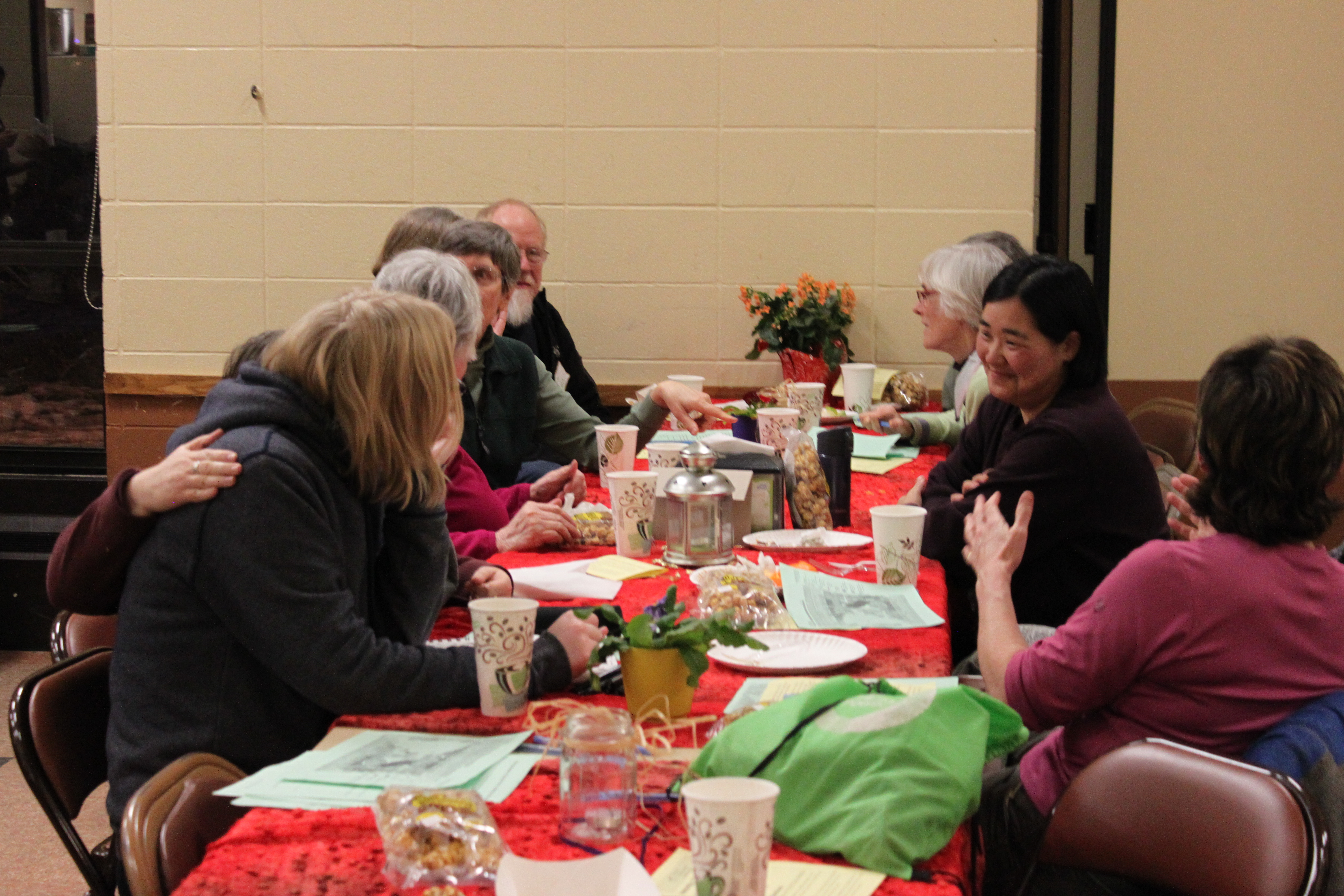 Board Member Joan Bennett emceed the awards ceremony featuring toasts by the neighbors who nominated their peers. Congratulations to Edain Altamirano, who was awarded the Leader of the Year and to Kim and Tom Medin, recipients of the Lifetime Achievement Award. In her acceptance, Kim shared that her husband Tom made a remark about when they moved into the neighborhood, it was a neighborhood with a little n, but once they got involved, it became a Neighborhood with a capital N.

CNO relies on these and the many other leaders who support our work, including recent work to improve the livability of the neighborhood, renter’s rights, shepherding a new transit village, filling vacant storefronts, and running the most inclusive farmers market in Minneapolis. Edain expressed, “This recognition is not only mine, but belongs to all people who struggle and change their mind for a better future that is rightfully theirs.” CNO has deep gratitude for the residents who give so generously to this neighborhood with a capital N over the last year and many years. 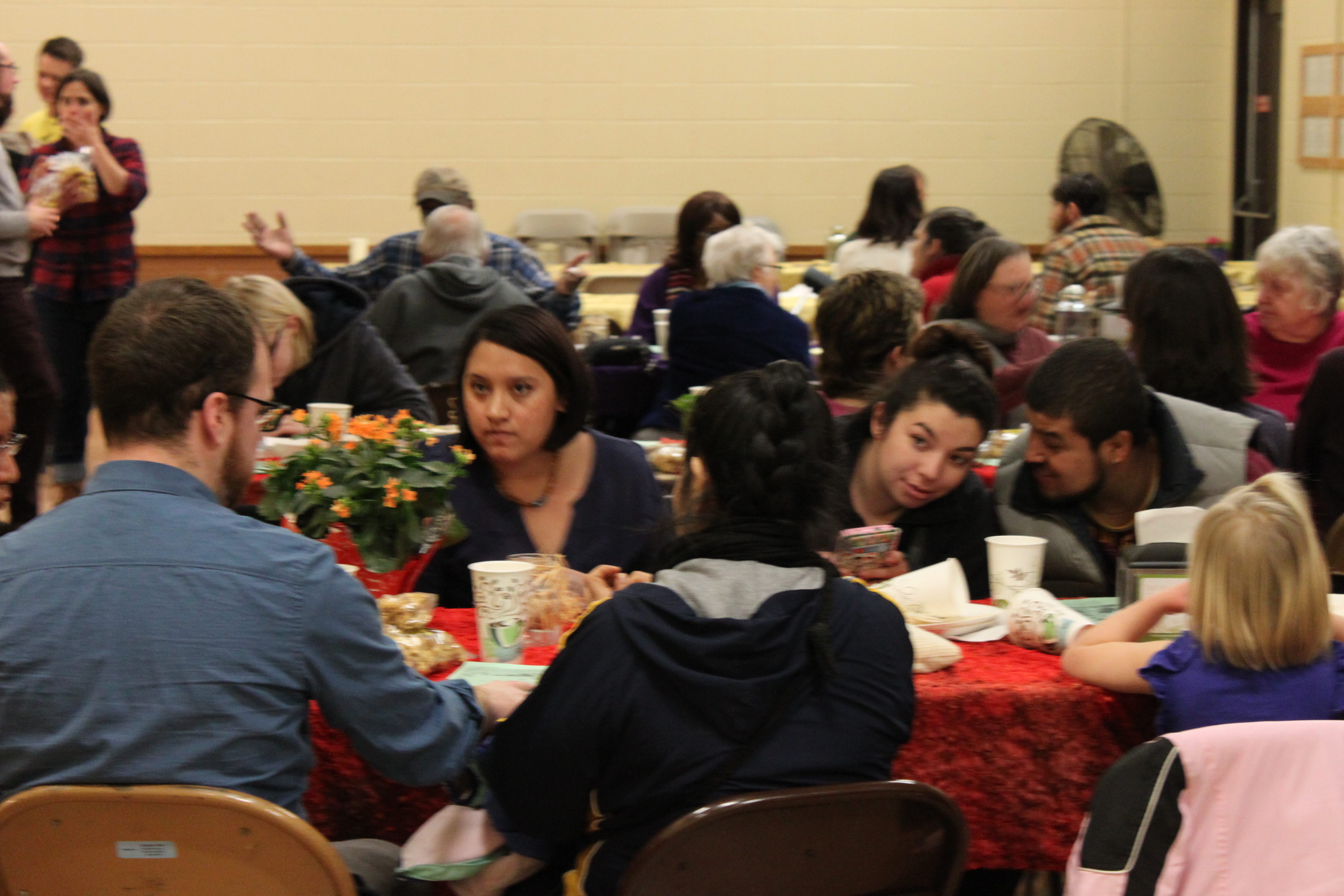 Read about all the nominees for the Leader of the Year and the Lifetime Achievement Award and their contributions to the neighborhood below:

Kim and Tom Medin nominated by Gaylyn Bicking
Tom and Kim are wonderful neighbors.  If you need a loaf of bread, ask Tom.  He's a great baker.  You want information on Flamingo Fridays, Kim is the person to go to.  Once I had an electrical problem and asked Kim and Tom for advice.  Within minutes they were at my doorstep with tools in hand.  They are those sort of neighbors!  You'll see Kim and Tom regularly at the Midtown Farmers Market, as well as cooking soups every year for Corcoran's annual Soup Cook-Off. We're lucky to have them.

Jane St Clair nominated by Phillip Koski
Jane has been an active member of CNO for many years through the Land Use & Housing Committee, volunteering at the annual Book & Bake Sale and so many other community efforts. Jane also has served as Corcoran’s representative to the Midtown Greenway Coalition where she support the creation and promotion of the Trail Watch safety patrol and other crime prevention efforts along the greenway. Thank you Jane for being a lifelong neighborhood leader!

Nominations for Leader of the Year Award

Liz Blood nominated by Peggy Barbis
For several years, she has hosted a monthly hour-long gathering for neighborhood "ladies" within a block of her home, a low-key, low-commitment opportunity for all of us to get to know one another, look out for one another, network. It's a small gesture that means a great deal to those of us in her vicinity.

Edain Altamirano nominated by Reyna Flores
I met Edain nearly two years ago while door knocking on our block about apartment repair issues and fast rising rent. Ever since then my compañera Edain has shown great leadership. She has led community meetings about the issues that we as Corcoran renters face as well as supported residents from across the neighborhood to assert their rights to decent housing and raise their voices. Edain also serves on the Corcoran Board of Directors. Thank you Edain for all that you do, ¡cuándo luchamos ganamos!

Devin & Adam Tomczik nominated by Sara Lott
Devin and Adam Tomczik are excellent neighbors and we are lucky to have them on our block! They have gone out of their way to assist in organizing our block parties, taking part in block leader activities, helping organize the book sale fundraiser, volunteering at Open Streets, and making our block's voice heard at the Land Use Committee meetings. They are always quick to inform neighbors of happenings on our block, as well as surrounding blocks. They also went out of their way this fall to organize a safety meeting with members of our block as well as inviting others from around the neighborhood to bring together numerous voices to address safety concerns and crime. Personally, they have also quickly offered help and muscle to assist us with projects around our home and we are so grateful for that. The Tomcziks are wonderful neighbors and deserve recognition for their contributions to our neighborhood.

Char Bird nominated by Beth Wagner
Charmaine Bird has been a wonderful neighbor and friend that has done so much for the Corcoran Neighborhood. As a talented and dedicated cook, Char regularly creates meals from scratch for over a hundred people at First Nations' Kitchen for their Sunday night community dinner. Last May she also used her food genius to help put on a BBQ in solidarity with apartment residents that were being unfairly evicted from their home. I always look forward to seeing her and hearing stories from her well-lived life. Char has so generously given her time to this community, and is so deserving of this award.

Meline Juarez nominated by April Riordan
I nominate Meline Juarez for the Volunteer of the Year award for 2015. Meline moved to the neighborhood this year and immediately found ways to get involved. She volunteered her great organizing background and strengths to support the economic development committee and graciously agreed to serve on the CNO board when a vacancy arose for our secretary. Meline is positive and energizing to be around. In her short tenure, she has had a great impact in many areas, including help with the fall fundraising appeal and with board recruitment. Meline shows that you don't have to be a long time resident of a neighborhood to have an impact - you just have to have a desire to build community wherever you are. She is an inspiration to us all and well deserving of this award!

Matt Kazinka nominated by Joan Bennett
Matt Kazinka has trouble saying "no", which is just one of his many great qualities.   Matt serves as a CNO Board Member as well as Chair of the Economic Development Committee. He also regularly attends CNO renters' meetings and community events.  Even more so than his stellar attendance record, fellow volunteers appreciate the thoughtful insight, enthusiasm and sense of humor that Matt brings to meetings.  As a staff member with the Lake Street Council, Matt serves as a source of both professional expertise and useful gossip to CNO's new Economic Development Committee.

Marcus Larson nominated by Genevieve Olive
I nominate Marcus Larson of Corcoran neighborhood for Volunteer of the Year! Marcus is an active volunteer with the Corcoran Community Garden. From seedlings to harvest time and weeding to garden pests, as a Master Gardener he schedules time weekly during the growing season to make himself available at the garden to offer up his expertise in all gardening matters to anyone from the neighborhood. His community involvement is a clear indicator of his commitment to a safe, happy and healthy neighborhood. Cheers to Marcus!

Mike Novak nominated by Miguel Goebel
Mike has been a tremendous asset to the Midtown Farmers Market over the course of the past year. As the market was gearing up for its transition to our interim location, Mike jumped right into working with the market’s Advisory Committee and played in large role in our communications plan for the 2016 season. He designed all of our new banners and signs that can be seen at the market site, as well as a number of other flyers and promotional materials for the 2016 season. What’s more, after a year of service Mike stepped up as a leader with the group and joined the CNO Board as the Advisory Committee’s liaison between the groups. With all that the he has going on as a husband, father and busy professional, Mike’s interest and eagerness to work with the market and CNO demonstrates his passion for making his neighborhood great!

Kevin Kirsch nominated by Eric Gustafson
Kevin has brought an amazing amount of passion and creative energy to CNO’s Land Use and Housing Committee this past year. During the Open Streets event on East Lake Street he constructed and performed a “crankie” show that told the story of Hoplandia, a precarious place where people hopped across pedestrian islands to reach the other side of a dangerous intersection. The show was emphatically received during the event and Kevin took his show on the road during National Night Out, visiting several blocks throughout the neighborhood. Cheers to Kevin for his can do attitude to address issues in our Corcoran Neighborhood!