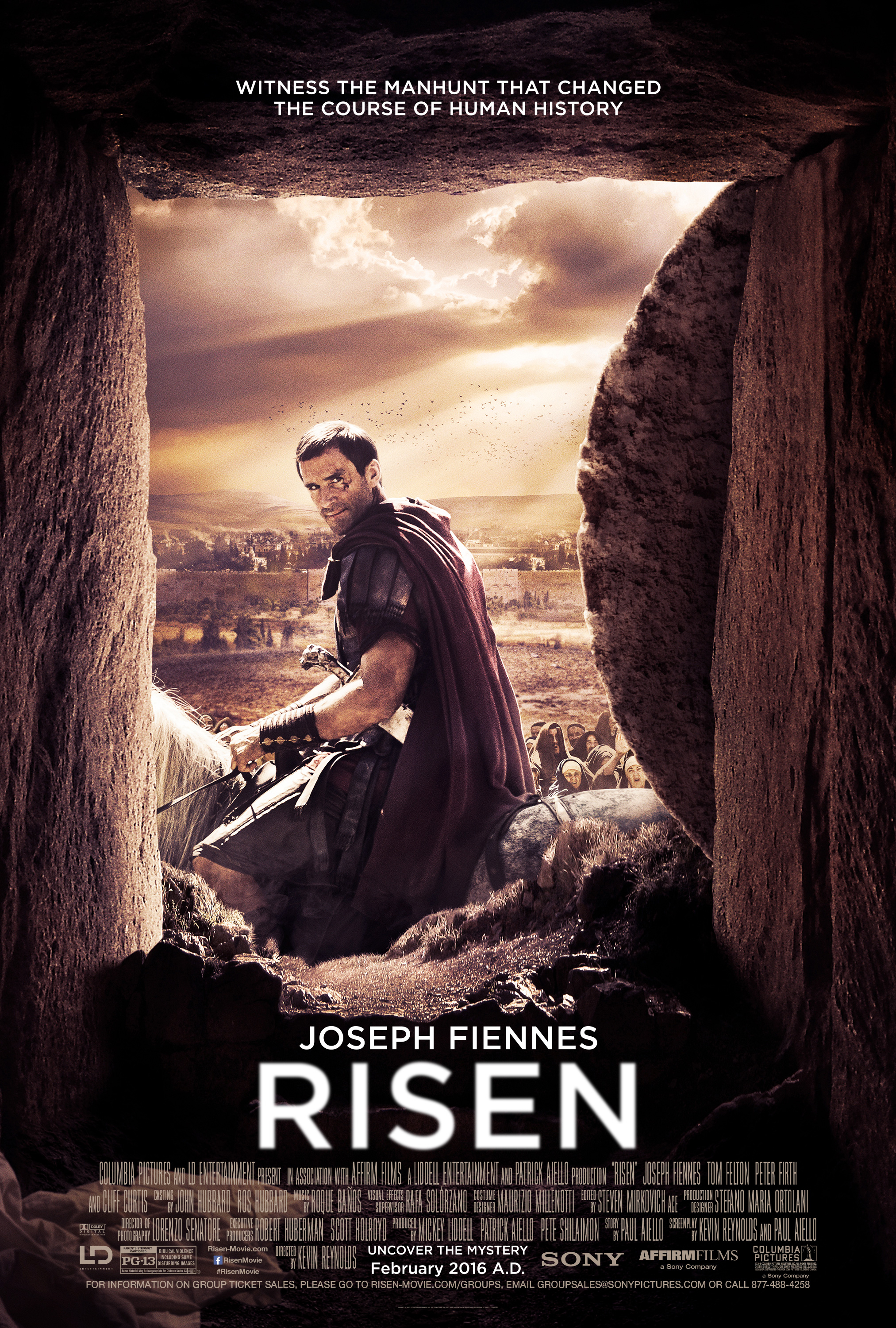 Risen tells the story of a dead man who comes back to life.  As a Christian, this was not new fare for me, but seeing it certainly was.  I must admit I have seldom pondered the time between the cross and the empty tomb.  What did it mean for Jesus' body to have no life in it…and for three days?  Risen asks these questions from the perspective of a Roman military tribune, Clavius, played by Joseph Fiennes, who is tasked with finding the body after it is discovered 'missing.'

I can think of few movie experiences where I was forced to look into the eyes of a dead person.  This was one of those experiences, and by far the most agonizing and disturbing, as the camera seemed relentlessly focused on this lifeless corpse.  However, as the title suggests, this is ultimately a story about resurrection.  And so [spoiler alert] at the moment when the audience sees the body alive again it makes for a powerfully cathartic experience.  Director Kevin Reynolds (a long way from his Waterworld days) brilliantly pans the camera past the disciples from Clavius' point of view several times until you realize that one of the 'disciples' is a face you have seen before…wait, he's the dead man whose features we have been compelled, against our will, to study…and he's smiling…aaaaahhh!

It was at this point that I was overwhelmed by the most powerful theme in the movie: the look of pure love Jesus gives Clavius, who had just supervised his crucifixion.  If Jesus has power over death, then he certainly has power over the likes of a trifling Roman tribune who ordered a spear to pierce his side while simultaneously telling the Nazarene's frantic mother to "shut up."  And yet, no vengeance, no retaliation…just love.  I remember thinking, "If I had been crucified, I would at least enjoy roughing up a few Romans."  Alas, no such enjoyment in Jesus' eyes.  On display: perfect -- dare I say epic -- love.

And this leads into the second most powerful theme…the impact this love has on the disciples, more so than even Clavius.  The disciples, including Mary Magdalene, are far from perfect (Simon Peter has a classic outburst), and yet they are clearly transformed people.  The Bible says, "Perfect love drives out fear" (1 John 4:18).  The love expressed between the disciples for one another (unlike any film depiction I have seen) combined with their lack of fear upon being interrogated, made me inwardly cry out, "Yes, this is how it is supposed to be!"

I also appreciated the Middle-Eastern look and feel of the disciples.  No Swedes involved in this one folks…and nothing against Swedes.  Cliff Curtis who plays the Messiah is of Maori (Polynesian) descent…I had to look that one up.  And get this, in preparation for the role, he spent thirty days in seclusion on the island of Malta under a vow of silence, just meditating on the teachings of Christ.  His goal: to embody love.  Well, mission accomplished sir.

Roque Baños (Evil Dead) did the score.  It is haunting -- at times creepy -- but exactly what the movie calls for.  Again, we're talking about the dead rising!  There is a stirring main theme that resurfaces in unique and potent ways (using a myriad of what appears to be traditional instruments) providing the viewer with a satisfying complement to the unfolding drama on screen.

Cohesively, this is a far from perfect film.  It will not win an Academy Award.  If it somehow does, myself and all of Christendom should boycott the Oscars.  But for all of its shortcomings, Risen has moments of soul-intruding beauty, the likes of which left me breathless.

Did you see Risen?  Let me know your thoughts.  russ@lebanonchurch.org