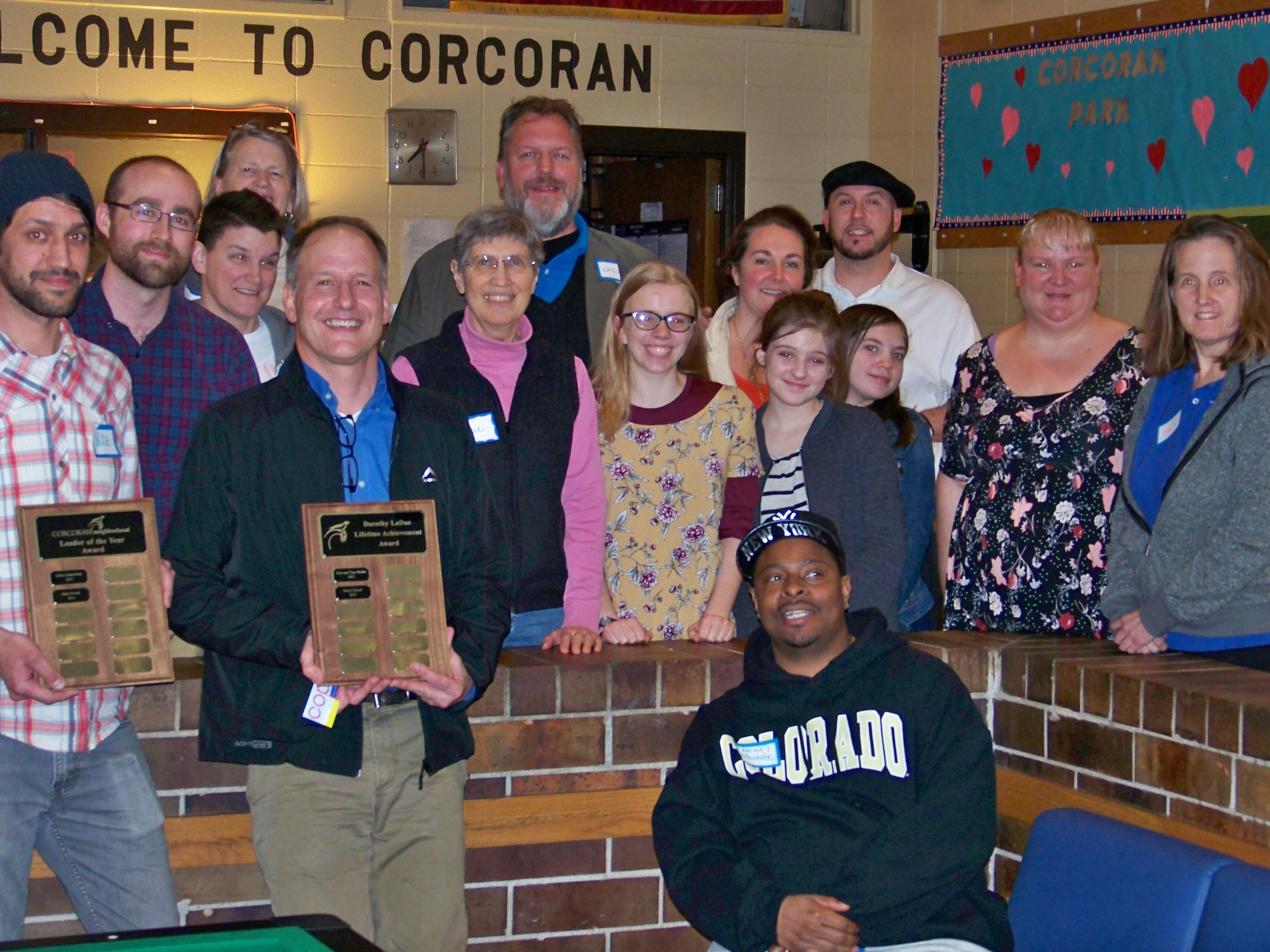 We here in Corcoran are lucky. We have an amazing number of volunteer leaders who are involved in making our community vibrant, united, and diverse. Thank you to everyone who came out to the Corcoran Community Awards Dinner on February 22nd at Corcoran Park. With over 70 people in attendance, everyone enjoyed the company, food prepared by the chef and owners of the new Corcoran deli called Vittles, and music. Congrats to our Lifetime Achievement winner Gerry Tyrrell and our Leader of the Year Mike Novak.

We are grateful to our neighborhood businesses for their donations to our taco bar dinner and desserts: Vittles, La Alborada, Salty Tart, Taco Taxi, Seward Co-op, and Cub Foods. Also to Acanthus Floral for the beautiful flower donations!

Leader of the year

Chelsea and Greg Miller are Corcoran residents and beloved owner-operators of Kabomelette mobile food kitchen at the Midtown Farmers Market. They frequently donate their time and resources to support CNO events, including the Community Awards Dinner. But now there is even more to love: they’ve brought Corcoran our very own deli! Through pure grit and a sizable personal investment, the Millers opened Vittles Catering and Deli on the corner of 35th Street and 23rd Avenue.This was no easy feat. Opening this little deli required making significant infrastructure upgrades to the existing kitchen and navigating complicated building code and licensing requirements. Vittles offers healthy, affordable, ready-made meals that incorporate local and organic ingredients whenever possible. We are so lucky to have these guys in our community!

I want to nominate Chris Sutton because of his amazing dream and hard work to bring together artists from the Corcoran neighborhood to create an art crawl! COPA is our neighborhood artists together to form a collective of artists and establish an art crawl that will honestly benefit our entire little community!  Not only did he bring this group of artists together, but he is so kind, friendly and always willing to help.  I couldn't think of a better person to nominate this year!!!!

I would like to nominate Parker & Ellie Adams as co-recipients for the Leader of the Year award.  Aside from outstanding -- and timely -- youth reporting (no matter how much homework they had), their many volunteer engagements throughout Corcoran demonstrated a profound commitment to bettering our neighborhood, with little or no personal gain (aside from the intrinsic) to them.  Such a selfless attitude serves as an inspiration to young and old alike.  Aside from all this, they are genuinely nice and fun neighbors, always greeting my family and especially our two daughters, who look up to them adoringly.  I am encouraged for the next generation with Parker & Ellie leading the way!

CNO staff met Marvin as we were kicking off outreach to neighborhood bus riders in early 2016. We recruited Marvin to help with this work, and his talent for connecting and having great conversations with strangers on the street was both stunning and very valuable to our Better Bus Stops project, resulting in recommendations to Metro Transit. We tapped Marvin again to engage people at the Open Streets East Lake event last summer, and he brought in over half of the 500 petition signatures our team gathered that day, helping inspire efforts by the City and County to begin to “Humanize Hi-Lake.” When a seat opened up on the CNO Board last Fall, Marvin jumped at the opportunity. Marvin has continued to contribute strong door-knocking and community engagement skills as CNO builds new relationships with residents who rent in Corcoran.

I nominate Annika Mikk for her volunteer leadership at the Midtown Farmers Market. Over the past two years, Annika has volunteered many of her early Saturday mornings to help with setup of the market. Not only does she show up at 6:00am on Saturdays to do heavy lifting, she has shown leadership in recruiting others to volunteer at the Market as well, bringing family members and groups of friends along to volunteer shifts and spreading the word about opportunities to volunteer with the Market among her fellow students at South High. We know we can count on Annika to show up when we need support, often with an enthusiastic crew in tow.

Jane recently completed a very active term of service on the board of the Midtown Greenway Coalition, where she served as the Corcoran neighborhood representative and helped lead efforts to make the Greenway safer, and to respond to crime. Jane also remains a core member and strong contributor on Corcoran’s land use and housing committee. In addition to providing leadership on her 21st Avenue block for many years, Jane has been an annual contributor to planning and pulling off big neighborhood events including the Corcoran Book and Bake Sale.

Meline moved from California to Corcoran and became an immediate contributor on the land use and housing committee and CNO’s board of directors, serving both as Secretary and Chair. She spearheaded efforts to improve the visibility and success of CNO’s annual campaign to raise operating dollars from individual donors from the neighborhood, pushing staff and board leaders to do a better job of “telling our story.” When Corcoran faced the potential loss of over 80 units of affordable rental housing in 2016, Meline’s skills as a former city council member and mayor were on full display, as she pressed our own council member to stand with CNO in support of our residents and our neighborhood. Her leadership has inspired and improved the service of staff, board members, and community members.

April is a stellar neighbor and leader on her block, and has been a transformative leader as Treasurer of the CNO Board. Using her expertise as a nonprofit professional, April has inspired stronger financial reporting that improved the board’s oversight of CNO’s finances and its understanding of that role. In 2016, April brought a new level of sophistication to the board, a “Mission Money Matrix” exercise that allows the board and staff to look at the mission impact and financial performance of its work on a single, simple diagram, and have more productive conversations about how to improve our work and set priorities for the year ahead. April has also provided stellar and steady contributions to CNO’s annual individual giving campaign.

I am nominating Penny Arcos for her leadership in our community organizing her third annual Operation Christmas Child Shoebox Packing Party at the Park building. This was a year-long endeavor that required multiple levels of planning and storage. Instead of renting a warehouse, Penny recruited Corcoran neighbors to collect and store the shoe boxes and toys until the event.  In the end, fifty volunteers came together to pack 246 shoeboxes in a little over an hour for children in the Caribbean and South Africa."

Matt serves as a CNO Board Member as well as Chair of the Economic Development Committee. Committee members really appreciate Matt’s ability to track tasks and lead an organized meeting. Over the past year, Matt has shepherded along some very important projects! Favorites include recruiting local businesses for the new retail space under construction at Lake and Hiawatha, and organizing a collaborative effort with local businesses to improve the streetscape at the “Chatterbox node” at the corner of 35th St and 23rd Ave. Further, as Matt is a staff with the Lake Street Council, and so CNO benefits from his professional experience in small business support and development.

Deanna Olson is a resident who shows up. She regularly volunteers to staff the information and token sales booth at the Midtown Farmers Market, assists with the Annual Corcoran Book and Bake Sale, and attends Corcoran neighborhood community events. At the book sale, Deanna works behind the scenes every year to sort books and set up the event. Her leadership at the Midtown Farmers Market provides enthusiastic and friendly customer service to market-goers. She is committed, consistent, and always a delight to work with!

I am nominating Rae Jones for bringing a sad, anxious, angry, and fearful Corcoran community together in the wake of Paul Knobbe's murder through an impromptu but extremely well-organized candlelight street vigil. Multiple community members of the more than sixty in attendance shared how empowering and healing the event was. The vigil also brought much-needed support to those directly affected by the tragedy, specifically Paul's friance' and friends, along with his employer at Winner Gas. Rae's quick-thinking efforts to bring in KG Wilson to lead the service, along with Paul's pastor Becky, added a powerful spiritual component.  I can only imagine what Rae is capable of given more lead time!

Mike has been a tremendous asset to the Midtown Farmers Market over the last couple of years. As the market was gearing up for its transition to our interim location, Mike jumped right into serving on the Market’s Advisory Committee and played in huge role in our communications plan for the 2015 and 2016 seasons. He designed all of our new banners and signs that can be seen at the Market site, t-shirts and totebags, as well as a number of other flyers and promotional materials for the 2015/16 seasons. What’s more, after a year of service Mike stepped up as a leader with the group and joined the CNO Board as the Advisory Committee’s liaison between the groups. With all that the he has going on as a husband, father and busy professional, Mike’s interest and eagerness to work with the Market and CNO demonstrates his passion for making his neighborhood great!

Back before light rail came to Lake and Hiawatha, Gerry and his husband Kevin participated in meetings to brainstorm and plan for the redevelopment of land near the new rail station. One key idea to emerge was a seasonal farmers market, and this became a foundational piece of the 2002 Corcoran Midtown Revival Plan. Inspired by this vision, Gerry contributed countless hours of sweat and leadership alongside volunteer leaders from surrounding neighborhoods to develop and launch the Midtown Farmers Market in 2003. When the farmers market property was put up for sale in 2009, Gerry invested and inspired countless additional hours by dozens of resident leaders to convince decision makers and developers to preserve the Market in future plans for the property. As a result, Hennepin County will soon break ground on a public plaza that will serve as permanent home for the Market. In May, the Midtown Farmers Market will launch its 15th season connecting 60,000 customers to 85+ local growers and entrepreneurs.